About four weeks after H.E. Norwegian Ambassador Bjørn Jahnsen presented his credentials to President Rodrigo Duterte at the Malacañang Palace last 25 September 2018, he finally had an opportune time to meet with the Board of Directors and Officers of the Philippines Norway Business Council (PNBC) for a strategic meeting last 19 October 2018 at I’m Angus Steak House in Yakal St. Makati City. Right after, the Council held its Networking Luncheon in the same venue, and the new Ambassador was the Guest of Honor and Speaker.

The members of PNBC were very eager and pleased to meet the new Ambassador and the other officers and staff of the Royal Norwegian Embassy in Manila. Capt. Ivar Thomasli, as President of PNBC, had the honor to officially introduce the new Ambassador.

The new Ambassador candidly described himself and his origins. Prior to his posting to the Philippines, he was extensively involved and worked on the Colombian Peace Process in the Ministry of Foreign Affairs in Oslo. His previous diplomatic assignments prior to his deployment to Manila include Mexico, London and Madrid. Ambassador Jahnsen was also the Official Spokesperson of the Ministry of Foreign Affairs of Norway from 2008 to 2012.

He was pleased to note that Norway and the Philippines have had 70 years of diplomatic relations to date, and that our countries enjoy excellent cooperation in many sectors and areas of interests. The Ambassador said he hoped to facilitate even stronger relations between the two countries.

It was a well-attended event with all seats occupied. The lunch was delectable and the warm, bustling atmosphere was quite befitting as a welcome event for the new Ambassador and his team. 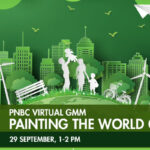 Updates from the President